The cart is empty Cart 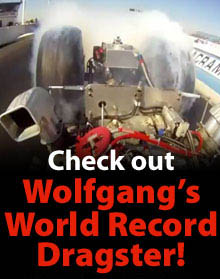 What is an emulsion tube and why do I care? The definition of the word emulsion is to mix. This is a tube found in a carburetor that mixes fuel and air for the main circuit. I will be talking about the tubes found in the Weber IDF carbs that are most commonly used. The theory here will apply to other carbs as well. The nice thing about the tubes in the IDF and some other carbs is they are changeable. So after this article you might want to think about changing them or simply look at what you have and know you have the right tube for what I am doing.

The tube sits in what I call a well. It sits in a tube so to speak that is part of the body (casting) of the carb. In the bottom of this well is a hole. This hole is part of a passage that leads to the bowl. The bowl is where the gas is kept in a carb until it is needed. Ok so that is how the gas gets into the well that the emulsion tube sits in, what about the air? The air is going to come down through the tube holder and then the air jet that is in the top of the emulsion tube and out the middle of the tube through some holes that have been drilled in the side of the emulsion tube. If you were to look in the side of the well of the carb you will see a passage that leads out to the auxiliary venturi or as the V8 world calls it the booster. That is where the main circuit comes out. In other words, gas comes up from the bottom of the well through the main jet that is in the bottom of the emulsion, tube then air comes down through the top and then that mixture comes out the side into the throat of the carb.  Still with me? Here are some pictures to show you what im talking about. 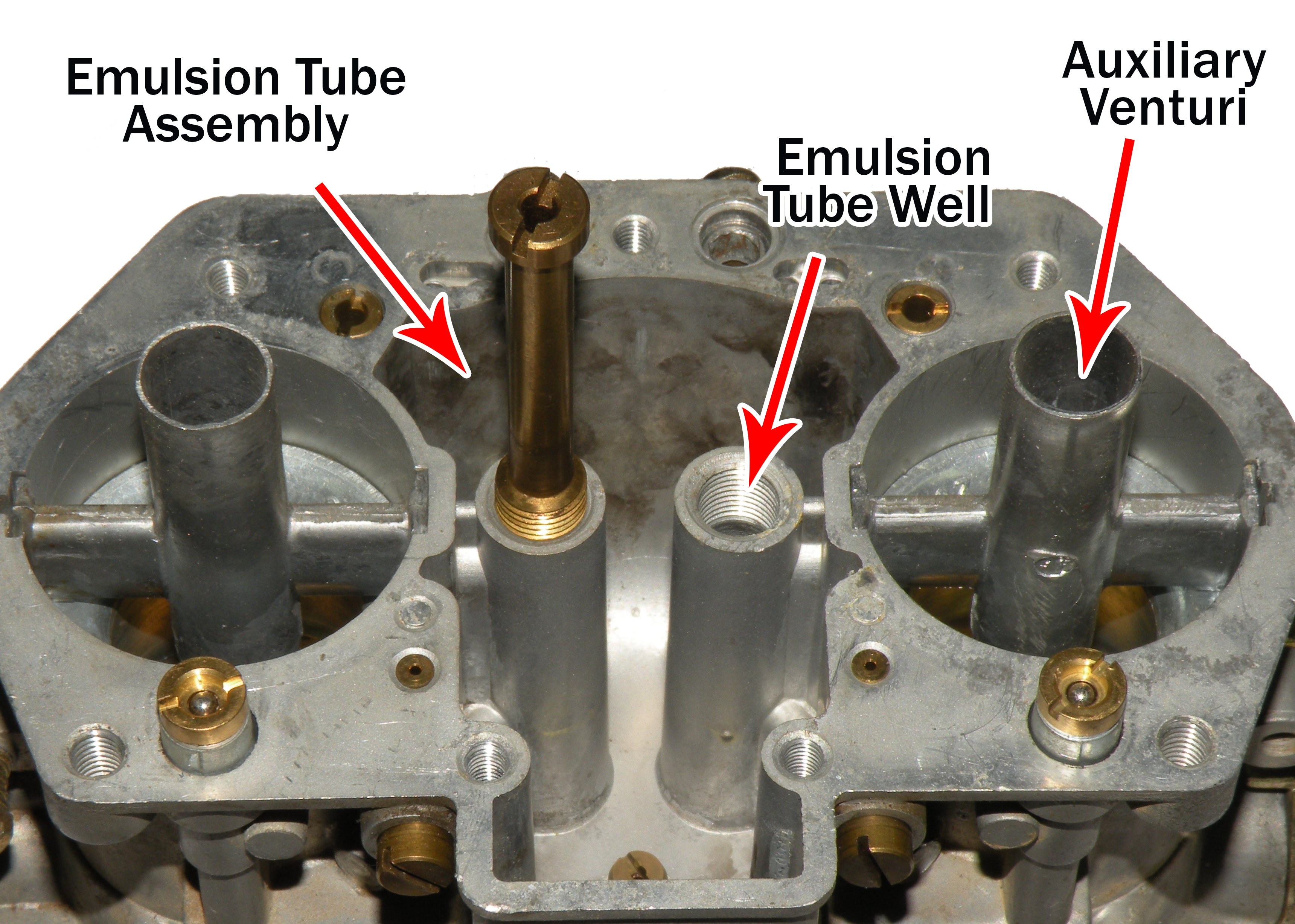 Let’s look at how the main circuit works then it will explain what the emulsion tube does. As you get into the throttle a vacuum signal forms under the auxiliary venturi (booster). Once it is strong enough it will pull fuel out of the well. Once the well is dry then gas is pulled up through the main jet and air is pulled down through the air jet and mixed. That mix then comes out of the auxiliary venturi. So unmixed fuel gets dumped first? Is that what I'm reading? Yes it is. This amount of fuel is very important to how the engine performs. As I said earlier the emulsion tube sits in a well. That well has gas in it. The amount of gas is determined by two things. First, and oh so important, is the fuel level in the bowl. Second, the diameter of the tube.

Let me explain. First the fuel level. The cast in tube or well is connected to the float bowl chamber via a hole at the bottom of the well. So whatever the fuel level is in that chamber it also is in the well. This amount that is sitting in the well will get dumped down the throat of the carb when we first get into the main circuit. So this level is very very important. Here is the kicker. I very rarely see them set right out of the box. What? You heard me. Brand new webbers are wrong out of the box. Other brands can be off too but I’m telling you the webbers most of the time are wrong. I don’t mean wrong to my specs, I mean wrong according to their own specs. So if you’re not sure, you should check it. Now the second factor. We have “x” amount of fuel in the well determined by the float level. Now the emulsion tube displaces some of the amount of fuel and the bigger the tube the less fuel you have. Let me use and example here. You have a glass and you put a marble in the glass now you fill the glass half way up. That gives you “x” amount of fuel. Now do the same thing but use a ping pong ball instead of a marble. Remember the level can only be half way. You have less water with the ping pong ball glass don’t you? Get it? Ok back to carbs. Now you can see what is happening here so if you want more fuel to sit in the well you would get a smaller diameter tube. If you want less a bigger tube.

Now that you know what's going on, let's look at some tubes. Emulsion tubes are a complex part with diameters and steps in the diameters. Air holes that are drilled at different angles and sizes not to mention how many holes. Pretty crazy stuff. I'm going to do my best to simplify all this. First, all tubes have four big holes at the bottom that the fuel comes up through. Once the well is dry, fuel comes from the bowl chamber, through the main jet and through these four holes. If you travel up the tube you will notice some small holes coming out of the side. These are for the air to come out. So air comes down through the holder, then through the air jet and now out of the holes in the side. Here is one of the tricks of the emulsion tube. Like I said all tubes have the four holes in the bottom for fuel. But, some tubes have more holes than others in the side or are drilled in different spots or at different angles. The more holes, the more air that will mix with the fuel. This is how they are controlling the mix. Generally, a tube that has more holes will have a leaner mixture than a tube without so many holes. 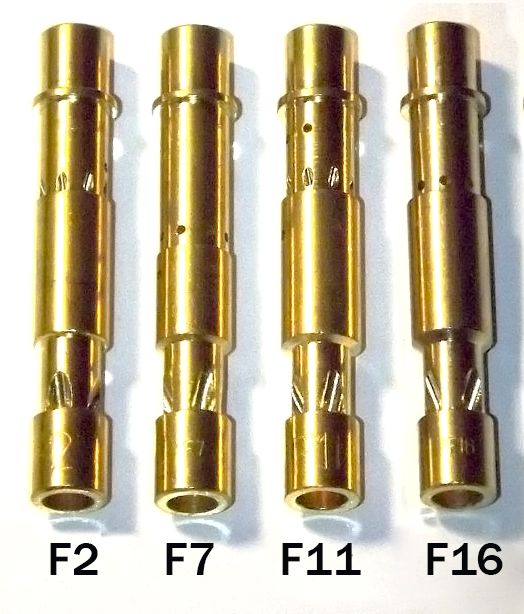 F11. This is the most common tube that comes in IDF carbs. It’s large in diameter so there’s not a lot of room for fuel in the well. It has a lot of air holes in the side so a lot of air can be mixed with the fuel after the well is dry. As you stay in the throttle the fuel ratio will continue to get leaner as the RPMS go up and load is increased. This tube is a great tube for a daily driver and most applications.

F2. This is one of my favorite tubes for racing. It usually doesn’t come in anything and you have to order them. It is a little bit smaller in size then the  F11 tube, so again not a lot of fuel in the well. Just a hair more then the F11. It has fewer air holes in the side so it mixes less air as the RPMs and load rises. As far as air fuel ratio goes you will see it flat line or just slightly rise. This tube works great for race cars.

F16. This tube is slightly bigger than the F11, so it has less fuel then the F11 in the well. It also has fewer air holes then the F2 so it will mix even less air as the RPMs and load rises. When you look at the fuel ratio it will actually get richer and richer as the RPMs and load goes up. I have yet to get these to work on a VW engine, even in an all out drag car. In theory they sound like the way to go, but in reality they get so rich the car just bogs. Now I have run four 48 IDAs on a hemi V8 and they worked great. Go figure.

F7. This tube usually comes in an IDA carb. They are smaller in surface area than the  other tubes I have mentioned. What that means is you get a lot of fuel at the hit. I find it’s too much fuel for most of the stuff I do. Some guys can get them to work, I can't. As far as the holes go in the side, they have about the same as an F11, so they get leaner as the RPMs and load rises.

I hope I explained this well enough. It is a complex little device in a carb that makes a world of difference in how your car runs. The biggest thing here I see all the time is floats being out of whack. The float level in these carbs is so important. If you’re not sure, check it.

No comments posted so far.

Subscribe to our RSS feed to stay updated with our latest blog news.